The Bachelor Ben H. Episode 1: I am in love with Ben

We open up with Ben in his natural habitat in Warsaw, Indiana, a picturesque small town that is a screensaver on every Dell computer in America. Ben talks in his perfect voice, with his perfect face, about his perfect life, and honest to God why is he on TV looking for love. Like walk into any establishment, anywhere and just point, and you can have anyone.

How did you get here. What does it mean for the rest of us. How do I feel about this.

His parents have been married for 600 years and they’re sweet.

Later, he leans against a tree with his knee up and we’re all living inside a Nicholas Sparks novel.

Oh, hi Ben in a McDonalds commercial, wasn’t expecting this, okay. I giggled. Sean appears. He is everywhere.

Sean, with his published book, and me, with clothes from the night before, hi.

Ben sits with Chris Soules, Sean Lowe, and Jason Mesnik, and tells them he fears he won’t be the guy that these girls want. HAHAHAHA ok.

“If I let fear keep me from doing really cool things, then what is life about.” -ben on being in the bachelor so dream big.

Chris Harrison said these women are from all around the world but in reality, one is from Canada.

Lauren B. first to arrive. OH DAMN HER DRESS THO. She is really normal. She’s a flight attendant so she gave him a wings pin and that he’s ready to “take off on this journey” it’s cheesy but memorable i guess good for her i guess

Amanda, Orange County, HER VOICE IS TOO SMALL AND TINY, I DIDN’T SIGN UP FOR THIS. She’s divorced with 2 daughters who are 3 and weigh more than her. Hasn’t dated since her divorce, do we believe that, i don’t believe that, define date.  “Ben seems like he could be a good role model.” ok he’s hot, just say he’s hot, you don’t have to go straight to the morals god.

Tiera, chicken enthusiast, 27, “these are her human babies.” Sheila the chicken stays in the room with her, everything is fine, remain calm. Her hair is half blonde and halfbrown on the bottom, we all miss high school. THE CHICKENS ARE FRAMED IN HER HOUSE. “What comes first the chicken or the Ben,” she chirps and smirks to herself.

Samantha, FL, attorney. I like her I think. Dad has ALS. Jumped right into the most depressing part of her life so ok I was kidnapped as a child, too.

if you haven’t seen this, stop reading my stupid blog and watch this.

Caila. Sales rep. Ohio. Said she got butterflies seeing Ben on TV then broke up with her boyfriend. SO SHE’S NOT PSYCHOTIC AT ALL WE HAVE ALL BEEN THERE.

She steps out of the limo wearing a new years dress, short and sequined, RUNS AND JUMPS AND MAKES HIM CATCH HER. YOU ARE 87 POUNDS AND I AM SO HAPPY FOR YOU, CAILA.

Jami, bartender (canada, we get it Chris). She says “really big……heart” kill me that was so painful

Samantha or “Sam” with a red lacy dress, tells him she just passed the bar exam. Hey samantha #NO1CARES then she said “Boxers or legal briefs” and thank god she has a career to fall back on amirite.

Jubilee walks out in a white low cut dress that’s awkwardly drapey in the front and too clingy in the back. Ben is so sweet omg makes her comfortable, she’s nervous, he’s sweet, but I don’t think she’s actually nervous, she just needs sympathy, I get it. She says a really bad pick up line but he is so sweet about it he is so perfect, I’m calm.

Lace, 25 yr old Real Estate Agent from Denver, just walks up and KISSES HIM RIGHT ON SMACK ON THE MOUTH in a black, lacey, backless dress so what is dignity. 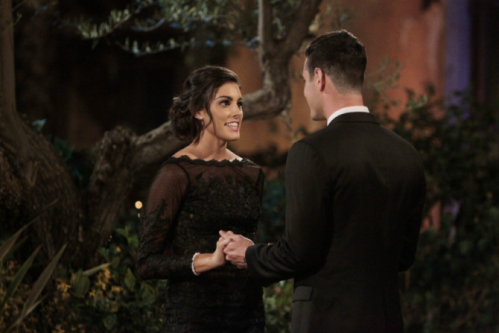 Lauren R. Houston, maroon pretty dress. She admits to stalking him over social media oh no help and tells him everything about him, oh god, this is like what NOT to do, except i would secretly love if someone stalked me and told me why is that weird.

“I’m either getting tired or losing my mind.” -Ben after speaking with her AW I LOVE HIM OK OK BREATHING.

Leah, event planner from Denver bends over in a sheer evening gown and throws a football at him through her legs and says “i knew you were a catch.”

A GIRL WALKS OUT IN A HORSE HEAD. “JoJo” from DALLAS. Real name “Joel”. PMS covered our fellow Dallasite in The Dallas Observer here.

“It’s not frightening, it’s normal” – Ben about the horse head OH MY GOD I’M IN LOVE I’M IN LOVE AND I DON’T CARE WHO KNOWS IT

Lauren H. So tan. caught a bouquet wedding bouquet and brought the dead flowers to ben that’s not desperate.

Laura, red head, i like her, cute pink lipstick, navy dress. Mostly normal until she lets him know friends call her red velvet and then it’s like ok.

Mandi, dentist, COMES OUT WITH A ROSE ON HER HEAD Haaaaaaaaok.. She said she “picked it out of her garden and that he can pollinate it later if things go well.”

“interesting,” ben whispers as she walks away

“No way.” -Ben when he sees the twins, whose profession is “Twins”

When they walk in, you can tell all the other girls are livid and the red head wants to kill herself, and no one’s emotions are stable in this moment.

“This is torture. Everyone’s gorgeous.” well WELCOME TO TEXAS RUSH BEN WE ALL HAD TO DO IT.

Girl walks in with a small pony named “Huey.” We learn it’s Megan from For Worth. “How do you compete with twins? WITH A F**KING HORSE IS HOW” -Megan.

but is the pony little sebastian???

Breanne, 30 yr old nutritional therapist from Seattle forces Ben to murder bread with her and yes you read that correctly.

Izzie shows up in onesie pajamas and says “I want to see if you’re the onesie for me” and my boyfriend started clapping so.

Rachel shows up on a hoverboard how is middle school going.

i just missed someone i dont even care i’m sorry.

Now Tiera (chicken girl) steps out of the limo, and immediately he tells her she is beautiful. She is like crazy tall and skinny, was not expecting that.

“LB”shows up in a short tight pink dress and i already forgot her.

Jackie shows up in a long red dress with ruffles on the bottom AND SHE HANDS HIM A SAVE THE DATE WITH THEIR NAMES AND WEDDING HASHTAG HELP. HELP.

Olivia is the daughter of my boyfriend’s client who’s a plastic surgeon WHAT A SMALL WORLD ARE YOUR BOOBS OR NOSE REAL, OLIVIA, someone needs to just tweet her and ask.

Becca and Amber walk in and all the other girls are immediately threatened. Jubilee says it’s unfair they’re here so she’s probably going to snipe them tonight.

BEN IS CALLING HIS PARENTS, WE FEMALES CAN ONLY HANDLE SO MUCH STOP.

All the girls are telling the camera that they can’t handle how hot Ben is. No I know, I get it.

Now abc is playing like pop rock inspirational music, we are all feeling motivated i am motivated.

Ben walks in the house, gives a little “my wife is in this house” speech, and the energy is great, and my roommate says, “what if the horse just craps in the middle of the floor.”

The weird rose head girl just pulled him away and badgered him about flossing AND HOW HE IS LAYING ON HER LAP AND SHE HAS TOOLS IN HIS TEETH, EVERYONE REMAIN CALM, SHE JUST HAS TOOLS HIDDEN SOMEWHERE IN HER SPANX, IT’S NORMAL.

Now he’s with Olivia and she is stunning, it’s hard to look straight at her. She was laid back and conversational so i’m rly happy for her. rlyhappyforher.

Benny boo boo thought San Antonio was north of Austin he is so tute.

Lace is intoxicated, jealous and pissed off in a dress, and she is all of us every weekend.

Lace steels Ben away from Jubilee. She asks him if she can kiss him again. GOD KEEP YOUR SPANX ON. Ben is classy and perfect and says no.

I can’t imagine how hard it is trying to talk to 26 humans in one night, much less 26 catty, thirsty thots.

CH walks in with a single rose.

OMG I TOTALLY CALLED THAT OLIVIA WOULD GET THE FIRST IMPRESSION ROSE, he can’t say no to that symmetrical face.

Ben said all of them made a good impression and it’s like calm down.

It’s mind-blowing how bad these women don’t want to be cut after barely a few sentences with a man.

LB gets called first, so she and her 5 inch circumference arms accept the rose, but I’m not sure she’ll be able to carry it back to her spot.

All these girls are actually dressed really well which knocks out about half of all my jokes please pray.

Jubilee gets a rose, may God bless the troops.

Jojo from Dallas gets a rose, I get a rose, Desperadoes, and Uptown get a rose.

IF HE GIVES MANDI A ROSE, I SWEAR I’M QUITTING.

He calls Shushanna and all I can think is SHE DOESN’T EVEN GO HERE.

OH BECCA GETS CALLED UP, HER AND HER LBD.

i think i need to see ben with a beard

Gird Ur Loins because Lace gets the last rose.

Laura, red head, is visibly sad, but also holding it together. “Maybe he’s just not into red heads. Some people aren’t. Hasn’t been the first time.” She’s self-aware and isn’t crying and it’s refreshing UGH MAKE HER THE NEXT BACHELORETTE WHY IS THAT EXTREME.

Breanne, the bread murderer, is “shocked” that she’s cut. She cries.

Back at the mansion

Somehow, Lace is still causing drama and ACTUALLY PICKING A FIGHT WITH HIM, and she RECEIVED A ROSE, she is complaining he didn’t make eye contact with her during the ceremony ok well can’t wait to see what she’s like in a relationship 3 years in.

And we see the “50 shades of crazy”scene for the actual 748th time tonight.

cut to Chris Harrison on The Bachelor Live after the show and WHERE IS HIS WEDDING RING? CAN HE BE THE NEXT BACHELOR? CAN HE HOST HIS OWN BACHELOR SHOW i’m sorry i’ll stop.

4 responses to “The Bachelor Ben H. Episode 1: I am in love with Ben”