15 Things I Learned During My Hamilton Obsession 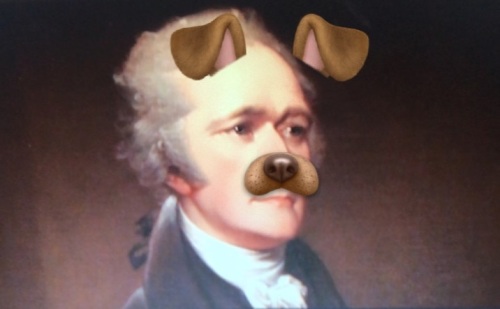 Revolutions are chic and so am I.

I am a hot 3 years behind on the Hamilton train and I am so sorry. I tend to run behind on the times. I have been late to the party on every single one of my mainstream pop culture obsessive phases. Harry Potter. Hunger games. Twilight. So I am the least surprised by myself.

I’m actually glad I waited so long to devote myself to Hamilton BECAUSE….

The past couple years I have been very busy obsessing over 16th century England. I bought a literal history textbook about the Tudors and read it like it was 50 shades. I rented educational documentaries that middle schoolers have no doubt been forced to watch and slept through. The googling. The TV shows. The googling more. I named my signature cocktails at my wedding Mary Queen of Scotch (HAHA BECAUSE SCOTS GET IT LAUGH), The Virgin Queen (After Queen Elizabeth I, cousin to Mary, daughter of Henry VIII and Anne Boleyn), and Tudor Tonic. SO IM SORRY IF THAT’S NOT ENOUGH FOR YOU, BUT I AM QUALIFIED TO BE AT LEAST AN ENGLISH CASTLE TOUR GUIDE. 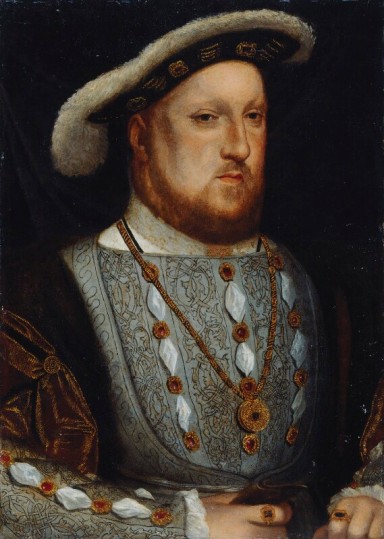 But let me tell you, fam. Nothing puts you in perspective and makes you appreciate what America stands for quite like an English royalty history phase. It was the perfect transition 2 tha birth of our friend, America. After spending years following the line of the Tudors, I was more than ready for a revolution, y’all, wow. Being a commoner was hard.

My body is ready, Hamilton, I said.

All I have listened to, talked about, thought about, and googled has been this soundtrack and the story of A dot Ham. It’s been all consuming.

A little bit what my past month or so has been like: waking up with Hamilton songs stuck in my head, blasting and belting the soundtrack start to finish while Lane and I are home on weekends, saying things like, “Sorry I can’t make it to dinner, have to get my plan thru Congress,” to friends, and googling the biography of every character in the play. I HALF JOKINGLY BUT ALSO DEAD SERIOUSLY REQUESTED “SATISFIED” AT A WEDDING RECEPTION. I CAN’T FINISH ACT 2 WITHOUT CRYING. IT IS ALL VERY HEALTHY.

So here are 15 things I learned on my journey with Hamilton. DISCLAIMER: I learned everything. I knew nothing. I know nothing about anything except Facebook advertising.

And more photos of what A dot Ham would have looked like if he had Snapchat, because that is important. 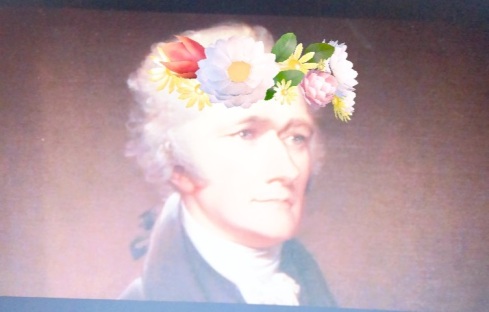 No. 2 Ham created the NY Post, coast guard, our nation’s financial system, blah blah, BUT AARON BURR FOUNDED CHASE BANK WHICH IS MORE ALARMING BC THAT IS A PART OF MY DAILY LIFE AND NOW I HAVE TO FIND A NEW BANK I GUESS.

No. 3 Hamilton was our nation’s first bisexual bachelor, with not only men and women but entire countries begging for a rose. Ham had a wife, but also was in love with his wife’s sister, but also had an affair with another girl, BUT ALSO WAS SEEN CANOODLING WITH JOHN LAURENS AT CHRIS ISO’S HALLOWEEN PARTY (Mean Girls quote, sorry.) Lin Manuel alluded to this in the play with an innocent line “Lauren’s I like you a lot, pants look hot”.

No. 4 Hamilton survived a million life altering tragedies before even half considering a revolution. It’s exhausting. Just listen to like the first 30 seconds of the soundtrack. A hurricane ruins his town, his father abandoned him and his mom, then a plague almost killed him and did kill his mom, then he moved in with a cousin, and the cousin committed suicide. Then there’s me and I’m so overwhelmed when I have to sit in Dallas traffic so like wow my biography broadway musical is going to be very boring.

No. 5 No Lin based Ham on rap because Ham “wrote his way out of death” quite like many rappers who wrote their way out of their situation with nothing but a pen, paper, and their own mind. Also there are like a dozen allusions to iconic rap songs. IF YOU DONT LIKE RAP, CALM DOWN. There is also swing, pop, R&B, and ballad-like songs, it’s not just rap. But we all know I am a black rapper trapped in a white girl’s body, so.

No. 6 It was a very very big deal that George Wash stepped down and “sat under his vine and fig tree.” (WOW THAT LYRIC, THAT SONG, GEORGE WASHINGTON’S GOING HOME). Because it taught us that the general of the revolution army doesn’t have to become a military dictator for the county to function. DEMOCRACY! TEACH US HOW TO SAY GOODBYE!!!! 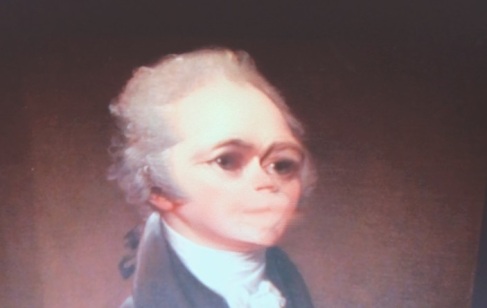 me, not throwing away my shot

No. 7 Thomas Jefferson like missed the revolutionary war lol? He was like Netflix and chilling in France the whole time lol? Founding father nowhere to be found lol?

No. 8 Also on Tom Jeff, he was in love with his slave, Sallie. He forced her to join in traveling back to America from France. Sallie is actually referenced in “What’d I Miss” (THOMAS JEFFERSON’S COMING HOME).

meet Philip, the first Hamilton to die in a duel. KINDA HOT DOE

No. 9 If you listened to the soundtrack, you know that Ham’s son Philip also died in a duel. Well, Ham had a lot of children not mentioned in the musical. Philips sister, named Angelica after her aunt, was TRAUMATIZED over his death. Basically became inconsolable emotionally and couldn’t function enough to take care of herself, living with Eliza until Eliza grew too old to take care of her. It’s unknown what exact mental health issues she had, if any honestly?? WOW. GETTING ROSEMARY KENNEDY VIBES.

swipe up for this choker, babes

No. 10 I love how Ham dies so soon and Eliza like moves on to create 7 horcruxes and lives forever so that she can keep his story alive wow. That choker is 10/10 one of the horcruxes.

No. 11 Politics was Democrat Republican VS the federalists. Runner up candidates became the Vice President. Everything was backwards when the country first started, it was hilarious. And it was actually the Jefferson vs. Burr election to change that and is still how we do it today, WOW, HISTORY HAS IT’S EYES ON YOU.

No. 12 America’s capital is in D.C. and not New York because of Hamilton. CAN U IMAGINE!!!!!!!!!!!!!!!! But a NY Capital would have made sense because that’s where all these dudes hung out. Like Ham was a member of the trinity church in New York, ps that church is still functioning. But Ham and TJ made a deal that the capital would be closer to TJ’s beloved Monticello home so that Ham could get his financial plan thru Congress. I can’t believe I’m a history professor now. I’m probably butchering this but idc, this is history according to sassy. You can read about the Compromise of 1790 here, great bar talk.

No. 13 Ok cool we won the revolution, we have a country now, going well, lalala, BUT REMEMBER THAT TIME BRITAIN TRIED TO TAKE OVER THE US AGAIN? WAR OF 1812, NEVER FORGET.

No. 14 Ham didn’t shoot upwards in the duel, as the musical hints, and I completely believed and accepted because I’m the most gullible human you’ll ever meet. He actually shot at burr first BUT MISSED AND SHOT COMPLETELY TO THE SIDE, SO THE STORY GOES THAT HE MISSED ON PURPOSE BECAUSE THAT’S THE CLASSY THING TO DO. Then Burr shot second, and didn’t miss, and here we are.

And now I will attempt to do the hardest task I’ll ever take upon myself, and rank Ham songs in order of my most to least favorite. Please, please pray.

me, writing the federalist papers

I have visited Ham’s grave December 2016 on a girls trip. I was ignorant and  hungover and knew nothing about Ham. So thankful I’ve grown up and am an adult now. 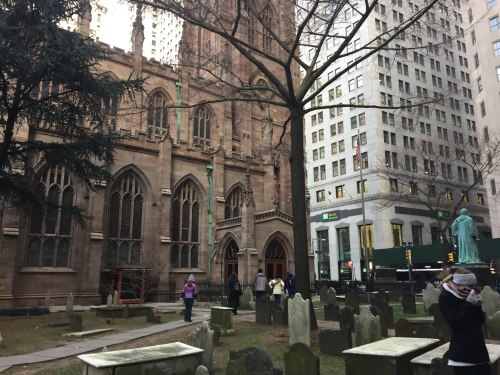 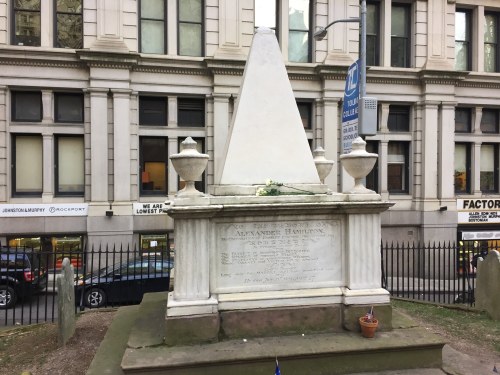 me, being very cute/sipping a coffee at Fraunces Tavern, a bar that G-Wash frequented.

And I think my favorite part of the musical is that they portray Aaron Burr as not a totally awful, evil antagonist. They give him a chance to defend himself in his songs and makes him relatable. They also don’t hold back showing Hamilton’s flaws. There isn’t a true good and evil in the musical, just messed up human vs. messed up human. But of course our favorite messed up human here is A DOT HAM.

Thanks 4 reading, do you feel smarter.

Tagged as alexander hamilton, hamilton, history, king henry VIII, new york, tudors, why do you write like you're running out of time