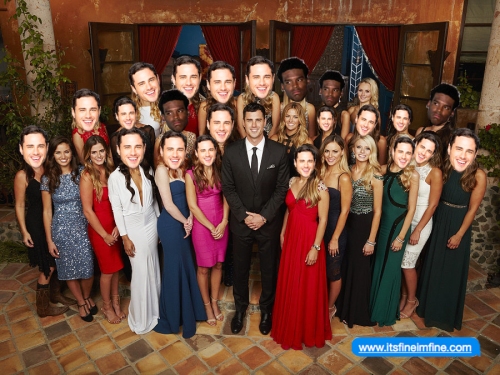 Last week left us on the cliffhanger of our lives, with the hope that Ben would take Olivia’s rose back and give it to another girl before the ceremony. But now that Beyonce’s dropped a single, I think we as a nation only have so much luck.

Ben and Olivia are alone and yet have a nation’s worth of an audience. His voice is low and heavy. Her brows are furrowed with concern. His words sink in, and she is forever shaken. This isn’t what she expected. This wasn’t in her plan.

The moment was dark, but brief.

With tears in her eyes, she says the unthinkable: “I don’t want to talk about it.”

And the show goes on.

THAT’S RIGHT FOLKS, OL’ OLIVIA IS STILL HERE WITH US!!!!! BEN’S KEEPIN’ HER!!!!! It was also in this moment that “I wanna talk smart things” was born.

Emily is more worked up than Miss Columbia 2016. Like Emily’s crown was just taken away.

Who already has a rose:

Who gets a rose:

Emily is grinning hard. itsnotcreepy. Every other girl is borderline crying… until Ben announces the next destination.

This is where I just hate the Bachelor women even more. Not because they’re 90 pounds, or kissing Ben Higgins, but BECAUSE THEY GET TO JUST TRAVEL LALALA FOR FREE, LIKE A NEVER ENDING BACHELORETTE PARTY, WITH WINE, AND YOUR SISTERWIFE HUSBAND.

They’re drinking mimosas. Chris walks in and says something the roses. Amanda has a half down half up bun and idk what the rules are on being a mom and being trendy n chic.

First date: Caila. “Let’s see if our love is reel” 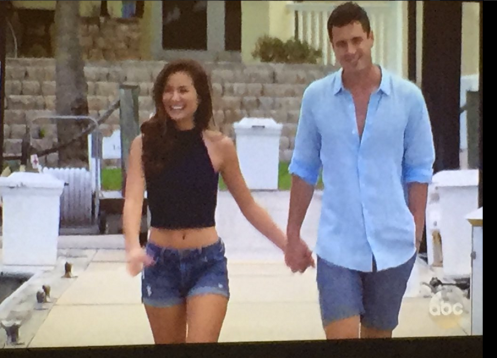 like fishing reel, the girls immediately caught on. V smart. Leah said she doesn’t know why she’s here, as she’s never had a OOO (one on one). tbh, leah, half of us agree with you, and the other half still doesn’t know who you are.

Ben walks in with his shirt only half way buttoned, like we get it, you’re on vacation, button your shirt back up now.

Now Ben and Caila’s belly button are holding hands as they get on a boat to go deep sea fishing. HASHTAG I WOULD HATE THIS DATE I THINK LOL. Unless the date is her getting to drink wine and watch Ben fish, then that’s fine, then that’s great, i love fishing.

BACK AT THE HOUSE

BACK AT THE BOAT

Is it necessary to wear a bikini while you deep sea fish? Isn’t that hard??? Like were your baby Gap shorts too constricting?????? What does the Deadliest Catch think about this???????

Ben tells the camera he’s worried that Caila is too bubbly, and that he needs to get below the surface. Is it just me or is “bubbly” such an insult? Does anyone in the word actually want to be called bubbly??????

He asks her how she faces hardships and struggles. Leading the witness, he says, “I’m sure you just face everything with a smile,” so she agrees, cuz like, what else would you say to that. And she’s smilling.

She’s hesitant to open up and be vulnerable, and it’s like, we know, exactly, and Ben, someone who’s been in her shoes, doesn’t understand why it’s hard for her to open up.

“I feel like I’m being put on the spot to just cry on your shoulder.” -Caila

There has never been a more self aware comment made on The Bachelor.

SO WHEN A FEMALE STARTS WITH “I FEEL LIKE” DO WE AGREE THAT MEANS SHE LOVES HIM????? BECAUSE SOMETHING TELLS ME NO???????

Ben is trying to get to the bottom of why Caila is scared she’ll hurt him.

Caila just spouted off a bunch of BS I don’t even know where to begin. Here is what Twitter had to say about it. 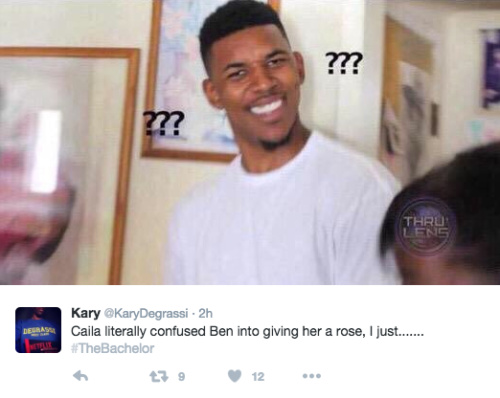 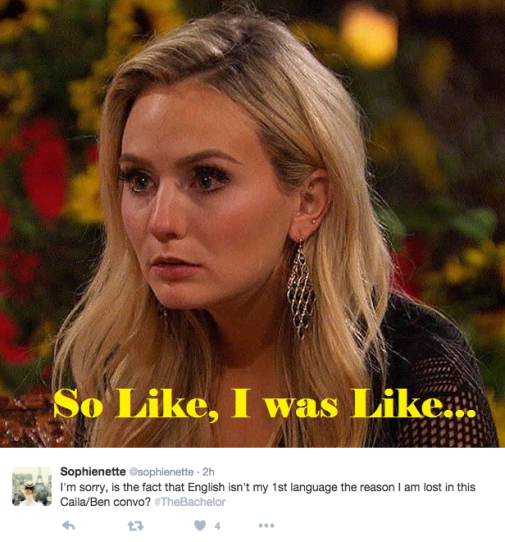 “It’s almost attractive that Caila can be confusing. Because she’s not just the bubbly girl.” -Ben.

IS THIS WHAT THE STRAIGHT MAN CONSIDERS “BEING MYSTERIOUS”????????

Caila basically just said, “I feel like I’m in love with being happy being with you, when I was younger, afraid, I am happy in this moment, part of me, amazing, I’m not ready maybe, feeling understood, being here, and it’s all because I’m here, in a deeper way, and opening up, vulnerable, and resonates with me, why I can’t share, about being with you, amazing, this is real.”

Ben said Caila challenged him and he wasn’t ready for it. He said it was one of the best dates of his life.

All these girls have the longest, most Victoria Secret hair I’ve ever seen, and like when was this recorded, because I just feel like no one has long hair anymore. #ijustfeellike #cuzlobs

Now they’re on a private island I guess, and there are pigs swimming around on the shore???????????????? And they’re going to feed the pigs??????????? Is anyone having flashback to the gospel rn when Jesus casts out the demons of the crazy man into the pigs on the island and the pigs go drown themselves, ANYONE????? RIGHT????????????? Ben is a God fearing man, he has a jesus tattoo, surely he’s aware of the story, did he do this on purpose, is there some underlying message here. ok.

“These pigs weigh more than these girls.” -Lane

“I didn’t know I was scared of pigs until today.” -Becca

THESE ARE MONSTER MUTANT PIGS, THESE AREN’T JUST ANY PIGS.

“This is like a bar in Dallas, there are just pigs everywhere.” -Jojo

But really, this whole scene is just half naked women being chased by extremely large pigs and someone, somewhere, is enjoying this way too much, and it’s terrifying.

Ben said as relaxing as the Bahamas is, he’s never felt more uncomfortable. He said the group date wasn’t fun and is upset that the girls aren’t having fun.

GEE, ALL THE GIRLS THAT YOU’RE DATING AT THE SAME TIME AREN’T HAVING FUN TOGETHER WHILE BEING MAULED ALIVE BY PIGS????? THAT’S SO WEIRD!!!!!!!!!

Talking with Jojo about how it’s hard treating every girl special, Ben says, “Of anyone else here, you get it,” ben to jojo so i dont get it. He acts like she’s been a Bachelorette before. why did he say that.

ben’s tattoo is so painful. sobad.

FINALLY BEN AND LEAH SPEAK and she isn’t even really taking advantage of it. In fact, she immediately starts crying and asking why she didn’t get this week’s OOO (one on one) date, so this is attractive and definitely makes him want to date her, gr8 strategy. 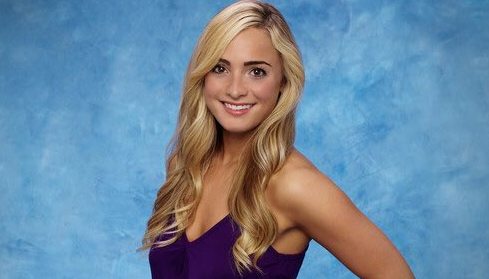 Date night with the group

Ben acknowledges that the day sucked and it’s like I almost feel sorry for you, but you still have like 7 hot girls here all for yourself so.

He pulls Becca aside and says “I feel like you were standoffish to me today,” and she agreed she was. She admits she’s worried about his connection with Lauren B. She actually had this great balance of communication here: she honestly said why she was hurt, didn’t blame him, and reminded him of her feelings for him.

OKAY NOW HE’S SITTING IN THE EXACT SAME SPOT WITH AMANDA SAYING THE EXACT SAME THINGS. JUST REMINDING HER HE LIKES HER. MAKING HER FEEL THE SAME EMOTIONS. LKSJFLSKJDFLSKDJFSLDKJF

SERIOUSLY WHOEVER BEN PICKED TO BE HIS FIANCE AT THE END OF THE SHOW IS SLITTING HER WRISTS RIGHT NOW. AS AM I.

me, as ben’s wife, watching the show

Leah should go home just for the purple dress she’s wearing tonight. Leah proceeds to tell Ben that Lauren B. isn’t who he thinks she is.

OH AND THEN LAUREN B. WALKS UP BUT APPARENTLY DIDN’T HEAR THAT??????

Ben tells her what was said. Lauren denies it because SHE’S JUST BEING HONEST?? AND WHY DID LEAH SAY THAT????????

Lauren B. goes back to sit with the girls and cries, and Leah nonchalantly goes, “What happened?….Oh I didn’t say that, I would never single someone out…”

Ben comes back and gives the rose to Amanda. Which is hard for me bc #teambecca.

The whole house is talking about the lie. And it’s all too obvious that it was Leah who told Ben the lie. ALL THE WHILE, LEAH IS PUTTING ON MAKE UP AND SNEAKING OFF TO BEN’S BEACH HOUSE.

Ben is alone drinking red wine watching sports. “This is his basketball and beer time,” says Lane. He greets Leah with joy and she is undeserving.

Ben tells the camera, in a nutshell, that it’s weird that Leah went so far out of her way, again, when they’re alone, to talk about Lauren B., and that the more she talks the more he feels a disconnect with her. Ben tells her he doesn’t see a future with her. God actual bless. He says it’s best they say goodbye and that he’ll walk her out UGH LOVE HIM GOOD THIS IS GOOD.

“He has no idea who I am and he completely missed out on that.” WELL THAT’S BECAUSE YOU COMPLETELY ONLY TALKED ABOUT LAUREN B WHEN YOU WERE WITH HIM.

Now the three of them are drinking white wine on the sand of a windy beach. Fun. He and Olivia go off and talk alone by the rocks. It’s funny because Emily predicted exactly what Olivia was talking about. Herself. 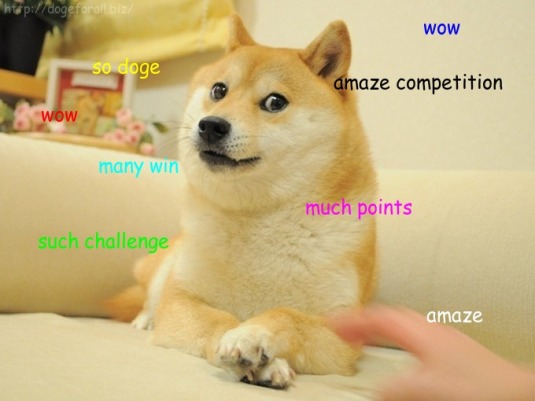 OH. THEN SHE TELLS BEN SHE’S IN LOVE WITH HIM. no, of course he doesn’t say it back, but somehow they end the convo on good terms ok.

Ben & Emily time. She tells Ben that SHE WANTS HIM THERE for milestones in her life. She won’t put her hair in a ponytail and it’s stressful for everyone. windy af.

The three of them sit together. Ben grabs the rose. He pulls Olivia aside. They’re all in the middle of an actual hurricane. Like it’s windy and rainy. When he starts talking, it sounds positive, and she totally thinks she’s getting the rose, and then it gets windier, and rainier, and then he says he can’t reciprocate anything she feels.

And then the best and worst thing happens.

Ben and Emily drive away on the boat, leaving Olivia there on the island. Alone to die. Enter: all the B roll footage of Olivia standing alone on an island, in the wind and rain, crying.

Jojo is crying and I have no idea why. calm down, you’re a shoe in, you’re Jojo, you’re in the squad.

Ben said this will be the hardest rose ceremony oh god why. why.

Who gets a rose

Lauren H. is going home. good. ONLY ONE LAUREN CAN FIT IN THIS MANSION. 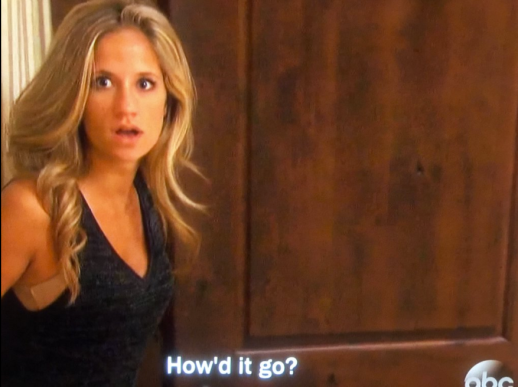 we see Ben shed rolling-down-the-cheek tears, and learn he will soon tell TWO girls he’s in love, and proceed to experience the consequences that come after that. *queue me going on a rant to my boyfriend about how mad I get every year at this time in the season when The Bachelor is SHOCKED that he feels such strong feelings for 2 women, after doing so much for 2 relationships. WHEN YOU WATER PLANTS, THEY GROW. WHEN YOU HEAT WATER IT BOILS. SCIENCE.ok.*