A part of me does not want to blog this. I just endured an exhausting weekend of travel, what’s there to say? We’ve all experienced canceled flights, delayed flights, turbulence, etc., what’s the point, right? Well I’ve already changed my mind back and fourth eight times about whether or not to write out this experience so I’m both winning and losing this battle when I say I’m going to blog this.

I’m home, curling my hair, like the real housewife I am, getting ready for the 8 PM flight to Chicago with Lane. I hadn’t been able to check in online for the flight, but I thought *literally nothing* of it and was not worried. Nothing worries me and it’s the scariest thing about me. So laid back it hurts.

Lane gets to my apartment and we’re about to Uber to the airport, where we were excited to enjoy a nice Chili’s date and top shelf Marg.

Then he got the email. Our flight had been canceled.

He called Southwest only to learn that there were no flights to Chicago again until Saturday. (The plan was to fly to Chicago, then drive to Bloomington, Indiana, for a wedding). Lane is smart and asked if there was a flight to Indianapolis. Yay! There was! For that very night!

But against all actual odds, I finished curling my hair, we made it to the airport, got boarding passes, ran through security, and made it with time to spare for the Indianapolis flight. Heaven is for real.

This flight had a stop in Baltimore, so we wouldn’t get into Indianapolis until around midnight or later. We made a hotel reservation in Indianapolis. We looked up car rental companies. And by we, I mean literally just Lane. He did all of this magical, manly, take-care-of-business-and-needy-girlfriend, just from his iPhone while we sat at the gate.

We ate really boring airport salads that tasted nothing like Chili’s enchiladas and I enjoyed two cups of Jesus Juice, which is white wine, for those of you who didn’t watch #RHOD.

Everything was good to go. all was well. Magical. God thing. Holy spirit.

My first time in Baltimore! Yay the north! Or midwest? Idk, I’m a southern blonde, tell me I’m pretty!

Lane, myself, and one other woman were the only passengers staying on the plane for the flight to Indianapolis, and we had maybe an hour-ish to do anything we could legally get away with in a plane/airport before departing again. I took it upon myself to drink more, buy magazines and York patties, and just in general be as intrusive and obnoxious as possible.

this TV ad is not an exaggeration, this all accurately describes my  experience with York patties.

If you follow me on Twitter or Facebook, you know I met two SW pilots on an personal, cerebral, and spiritual level. What you don’t know is that all I did was ask them for a photo. I just wanted to be in lil Southwest pilot sammy. I wanted a nice lil insta photo u kno.

But then they made the mistake of asking me if I wanted to sit in the cockpit.

It’s clear the pilots had no idea who they were talking to, and not to mention, that who they were talking to had been well-served in the wine department. To put it briefly, I was VERY enthusiastic about the whole experience. They pushed buttons that made lights and sounds go off, “or what they do for the kids’ tours,” as they put it, and it was received with high pitched squeals, and clapping, and the whole nine.

“We’ve had 7-year-olds who want to be pilots when they grow up who weren’t as enthusiastic as you in the cockpit.” -Dallas Southwest Pilot

My time in the cockpit was beautiful, never-done-before, earth-shattering, iconic, unstoppable. And then it ended.

With still plenty of time to spare, Lane and I returned to our seats, in the first row, so I could be as close to the cockpit as physically possible, and continued to talk to the pilots. Their names were Duncan and Nate and they know my bff PMS, and by that I mean they’ve never met her, but have received emails from her, and I know this bc I asked. Bc PMS works for SWAPA and I don’t even have time to explain it just fun fact.

Nate was particularly interested in telling us his life story, and I was all over it. I know about his career path. How he met his wife. Her job. Her height (4’11”). About their two young kids. About what it’s like to be a pilot. About how technology has changed in the industry (I work for HPE so I asked about technology idk wine help). How he tries as best he can to stay away from social media. His home address. His social security number. Etcetera.

Or, as Lane remembers the pilots:

The connecting flight was canceled. A THIRD flight attendant didn’t show up, so they couldn’t take off, and the pilots ran out of hours, which I didn’t know was a thing, and now intend to use an an excuse for everything (sry cant make ur dinner party, im out of hrs).

RECAP: A THIRD FLIGHT ATTENDANT DIDN’T SHOW UP. THAT’S WHY WE COULDN’T DEPART. LIKESHIT, I WILL BE YOUR FLIGHT ATTENDANT, PASS ME A NECK SCARF AND KHAKI MOM SHORTS, I GOT THIS.

LOL but no problem, right, like we’ll just get a hotel and fly out tomorrow.

We were told to find the Southwest clerks to get refunded and reschedule a flight. We, and about 100 of our frustrated friends, walked all over the airport to find ANYONE who worked at Southwest. We maybe spent 1 hour just trying to find Southwest staff. We landed on people at the baggage claim who have no idea what to do, because when the system is down, corporate can’t give them instructions, they can’t see flights, the whole nine. We find other Southwest people at the check in area. We get in line. The line is extremely long.

No you don’t understand.

The line is extremely long and every single person in it needed to get a refund or get rescheduled or both. We waited in line from 11 PM~ to 4:30 AM. did u read that. WE WAITED IN LINE FOR FIVE AND A HALF HOURS.

But we did stand next to the loudest, largest guy in line, and his name was Daryl, and also our friend Leslie, miss them.

P.S. did u kno airlines’ days technically start at 4 AM? So when Lane and I got to the front of the line — I kid you not — the lady helped us find a flight to Louisville BUT HAD TO RESTART THEIR COMPUTERS/SYSTEM FOR THE NEW DAY SINCE IT WAS 4 AM. THIS TOOK A LONG TIME. I’M FINE.

By this time, I had developed a migraine. I don’t mean a post-wine headache. I mean a real, insufferable, I-want-to-kill-myself, migraine. After getting refunds and rescheduled, Lane and I had to wait in the security line, and go through that again, before FINALLY getting to our gate (BECAUSE WE STAYED THE NIGHT IN THE AIRPORT IF YOU HAVEN’T GATHERED). I was so unbelievably spent, plus had a migraine, that I laid on the floor at the gate in the fetal position. I had the kind of migraine that forces your eyes to purge tears, no matter how hard you fight it. So I cried.

i laid on the floor

i laid on an airport floor

i laid on an airport floor and cried

i laid on the airport floor and cried in the fetal position.

This scene in my life is the point of this blog. I snapchatted this. I tweeted this. I told people this. And everyone’s response is the same: I thought you were kidding. PPL TELL ME THEY DONT KNOW WHEN I’M BEING SERIOUS OR WHEN I’M BEING SARCASTIC IDK WHY.

The saddest part is Lane put socks on me and I was wearing a maxi dress. So I had to wear bright white socks with a maxi dress on the floor and it was so unsightly.

I posted this on Facebook and ate a life changing meal in Sellersberg, which is not our destination city. 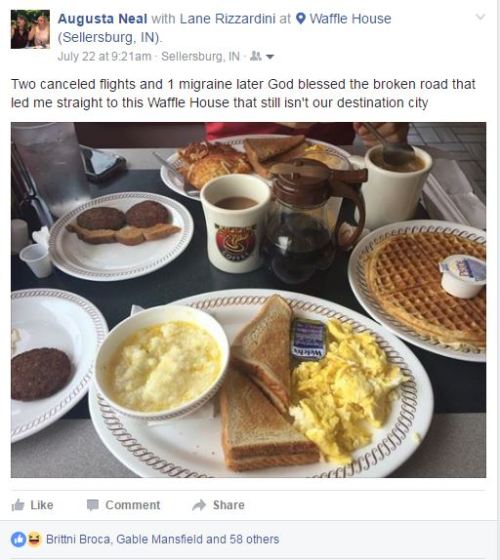 We made it. We were there. In our destination city. In the flesh.

We were both too dead to tour Lane’s college town memories, so we slept the entire day, and I would slept into the night, followed by the rest of the night, except we had to you know, go to social things, and do stuff we came to do, like be awake.

I’m so tired of writing this blog is anyone still reading it. Just know that we faced one final challenge in the weekend of travel, and that was a huge rainstorm that caused a delay, which turned into a flight of THE WORST turbulence I’ve ever lived through. Omg. And I sat next to a very nice, but very large man who was sitting in my seat just as much as I was.

This is me Thursday – Sunday, thanks.