That one time I thought I had oral cancer

This is a story of a real white girl who thought she had actual cancer because she had a sore throat and suspicious tongue/throat bumps for three straight weeks. It is not dramatic or ridiculous at all.

It all started the Tuesday after Halloween. My throat hurt. I thought nothing of this.

It’s 1:13 PM on a Saturday afternoon and I’m babysitting. Grand Master 2 and 1/2 year-old Wesley had just laid down in his bed chambers for his daily nap. Since my throat still hurt, I decided I would take a casual glance at it because why not.

The face of the devil himself was staring back at me in the form of bumps. Bumps I had never seen. All the bumps. FREAKING BUMPS Y’ALL

NOTHING LIKE FREE TIME AND WIFI. I proceeded to spend the next hour or so incessantly Internetting/self diagnosing/stressing/sweatIng and taking four thousand iPhone photos with flash. Literally do not go through my camera library right now.

My “omg i have cancer” thought process

ok so i have bumps on my throat, they’ve been there 2 weeks, I’ve had no other symptoms of being sick, i don’t have allergies, so basically i have pre-HIV, because problems with the tongue are usually just results of bigger diseases going on, so no big deal, i either have diabetes, cancer, or pre-HIV/pre-pre-AIDS, even though i’ve never even done illegal drugs, but i made out with a stranger last new years, and delayed symptoms are real, and i had the stomach bug a month ago and i lost 7 pounds in 3 days so it’s clear my immune system is crashing and oh my god what if it goes to my brain then i have to decide if i want to go the death with dignity or just the old fashioned way and oh god now i’ll NEVER finish the Not That Kind of Girl book

I literally hadn’t been this distraught since I found out Nelly had his own reality TV show, naturally titled Nellyville.

I texted friends. I told them I’m dying. I told them cancer is real and I have it. All of them told me to stop googling.

As weird fate would have it, I was due for the bi-annual teeth cleaning. I made the dentist stick a flashlight in my face and look at my throat. I was ready for him to tell me I’m fine and it’s nothing, but that’s not what he told me. I repeat that is not what he told me.

“Yeah, those are odd. Let’s get you back here next week to see what those bumps do. If they’re not gone, I’m going to take a biopsy.”

I realize biopsies aren’t necessarily a big deal, because there is such a thing as benign, and things aren’t what they seem, and things go away.

On the other hand, I’ve never broken a bone, I have 20/20 vision, and my worst injury to date was drunk-spraining my ankle in Deep Ellum Labor Day weekend 2014. SO THIS BIOPSY REVELATION THREW MY HEALTHY ASS FOR A LOOP.

Then I had to make a decision. do I tell my parents about this? do i really want to freak them out, make them worry, ruin their Thanksgiving, panic them??? will my mom send me to M.D. Anderson?? So of course I decide not to. I tell my sister I’m not telling the parents so everything is official. 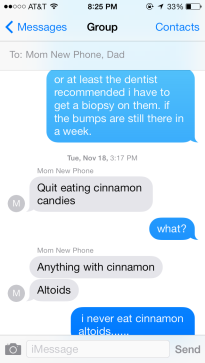 My mom, who has been a hygienist longer than most of my blog readers have been alive, responded to my I MIGHT HAVE 23 YEAR OLD CANCER text with “cinnamon candy” accusations.

Not too much happened in the countdown week to the biopsy appointment. Just some mild precautions on my end. You know. Like scheduling 87 appointments with different doctors in Dallas.

One with my OBG (for literally no other reason than to be extreme, SRY IF IT’S TMI~*~*~*~), an appointment with a Baylor doctor specializing in otolaryngology, and one with a general ENT doctor who could get me in A.S.AP. on ZocDoc. SO, if you’re into math, including the dental appointments, that is five appointments in a two week span for a sore throat because I’m not extreme.

So now we’re all caught up to the day of biopsy, also known as, this morning.

My computer alarm rang out at 6:45 A.M. Yes, computer. My one iPhone charger broke last night and I had to use all my cunning survival skills to figure out how I would wake up in the morning without an iPhone.

I don’t want to talk about it but 1 car charger, 1 wall, and 3 cords later, I had literally spent $70 on chargers.

I was on time for the dentist appointment. My bumps were still there and I was still in pain, so I was certain I would be getting a biopsy. I had mentally prepared myself. I had sent out car selfie snapchats saying “biopsssyyy tyymmmmeee” and everything.

WELL I WAS WRONG. He examined the bumps and instead of going the biopsy route, he decided to prescribe me antibiotics (clindamycin???? i’m pretty sure i once took this as an acne medication??? i’m pretty). Then he scheduled me another appt for the following week. ok then.

EXCEPT I’M STILL CONVINCED I HAVE ALL THE DISEASES IN THE WORLD.

Which is fine because i had another appt that morning with the ENT guy from ZocDoc.com it’s fine hehe. This doctor knew everything there was ever to know about tongues and all things mouth and idk he might have been God himself.

He took one good look at my throat and told me it was all entirely normal. NOT EVEN SICK. LIKE JUST ACTUAL NORMAL. OKAY THEN. He pulled out a large text book filled with pictures of tongues. He pointed to one that looked like mine. The text under the photo said “Prescription: reassurance.”

so i guess inflammed lymph tissue and a possible case of acid reflux all mix together to create an anticlimactic diagnosis complete with an over the counter drug recommendation. 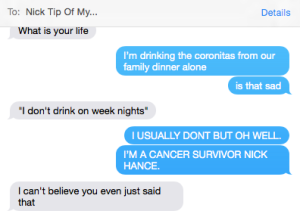 Tagged as 23 is hard, ankle sprain, doctor, help, i have a college degree?, parents