I got an endoscopy today

Am I an obese middle aged sedentary male? Do I eat candy and spicy food nonstop? My esophagus seems to think so. My esophagus hates me.

I’ve gotten heartburn as long as I can remember. In high school cheerleading practice. Almost anything college-related provoked it. Just LOOKING at Mexican food. Everything makes my heart want to digest itself with stomach acid.

Last weekend, I went to a wedding in Amarillo, and forced my friend to take me to a gas station so I could buy TUMS before the reception. It’s hard. Every day is hard.

So when I had basically chronic sore throat last fall, lost a little weight without trying (God Bless GERD and the troops), and started to randomly lose my voice, I finally called a gastroenterologist (i didn’t  have to google how to spell that word at all). She wanted to do an endoscopy.

SURE YOU CAN SEDATE ME AND SHOVE A GOPRO DOWN MY THROAT.

This is how it went down.

The only real preparation they give you before getting an endo is to “fast from midnight until after your 8 AM procedure.” SO. LIKE BASICALLY HOW YOU TREAT EVERY OTHER DAY WHEN YOU’RE ALIVE. Like, WELP THERE GOES MY 2 AM HUMMUS SNACK.

So to suffer through the rigorous fast, I apparently felt it was very necessary to go out for beers and unhealthy sandwiches after work. Because of course my procedure is the day after Saint Patrick’s Day and of course I will stop at nothing to drink green beer on a Tuesday. My mom wasn’t thrilled.

*And by two beers, I mean three beers and an Irish car bomb. Literally what is wrong with me.

In true-to-myself fashion, I woke up in a panic at 4 AM, after having multiple nightmares I was going to wake up late and miss the procedure (I could write a whole blog about just the dreams, but I’m sparing you bye). And I had a spliting headache. So I broke the fast and took an ibuprofen with water (IS THAT ALLOWED???).

I woke up an hour before I had to be there, so that initial panick went away.

AND THEN IT CAME IMMEDIATELY BACK.

Because I’m really responsible and didn’t have the papers with the hospital address. And after scouring my phone for notes, calendar event details, and emails, I could not find the address on my phone. HAHAHAHAHAHAAHAH

It actually wasn’t a big deal, I knew the name of the center and typed it into Google Maps and we arrived 3 minutes early, but my mom is still going to kill me when she reads this.

So I get there, fill out the paperwork, became terrified of the other patients, and was finally called in the backroom.

And guess who my nurse is. WHITNEY FROM THE BACHELOR, HONEST TO GOD. Well it was her clone.

THIS PERSON WAS MY NURSE Y’ALL

Whitney asked me for my birthday nine hundred times before leaving the room to let me change into the hospital gown. I’m really smart and put my gown on backwards.

Wanda immediately says “Why yo gown on backwards??? I don’t want to see your breastses.”

Wanda asked me questions, to which I responded, “Yes mam.”

And when did “mam” become rude? Wanda gave me the “she’s not old enough to be a mam even though she’s over 50” I was like oh.

Wanda jabs a needle in my right hand (STILL SORE AND SWOLLEN BTW) as she joked about how she barely does this, thinks the last time she did it was a year ago, and learned from YouTube. HAH. OK WANDA. UR FUNNY it’s not funny. You could tell Whitney had heard all of Wanda’s jokes before.

I hate all things  medical and anything related to the human body so I was actually nervous even though it’s not a big deal at all. Like even Kim Kardashian’s wedding to Kris lasts longer than an endoscopy procedure. It’s nothing.

They wheeled me into the procedure room and low and behold GEORGE LOPEZ WAS THERE. 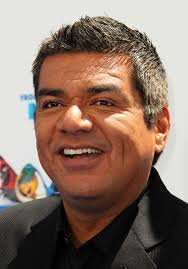 I was so tired, they probably could have done the whole thing with me just naturally asleep and I wouldn’t have noticed, but they filled my veins with anesthesia anyway.

lalalala it’s over and they wheel me out. Different unidentified nurse shakes my back and tells me to wake up, so I do. She said “Oh you’re wide awake already!” LIKE HI YOU JUST SHOOK ME, YES I’M UP. She said I was more “with it” then other people who had endoscopies, “probably because I’m young.”

My mom is convinced I metabolize anesthesia faster because “Your FATHER is a REDHEAD, Augusta.” But maybe she is right, because snap, crackle, POPPED out of bed and was ready to twerk in no time. I mean I was tired. I was dead ass tired. But I was functioning.

The doctor showed me pictures of my insides before leaving and they’re gross. She said “Everything looks fine. There is a little bit of redness and inflammation right here, but that could be normal, and were taking samples to biopsy this part over here, but everything looks great.”

SO APPARENTLY I’M MAKING EVERYTHING UP AND NOTHING IS WRONG WITH ME IT’S FINE I’M FINE. GOWNS OPEN IN THE BACK. NOT THE FRONT. THEY AREN’T CARDIGANS. IT’S HARD.

One response to “I got an endoscopy today”