SOME SELF PROMOTION: Justpmsing.com and I Started A Podcast

The Basic Podcast is here.

How and why in God’s name is this happening, you may be asking yourself. Long story short, a very well-respected journalist in Dallas reached out to Paige about a podcast deal for her blog, with a new company called On-Air Media, which is also based in Dallas. She said sure, but enlisted me for help to get sponsors. I said sure, but we’re not naming this the PMSing podcast.

And thus, Basic was born.

Some highlights so far…

Episode 1: We’re Basic Because We Blog

We talked about why we started blogs (including the history of my OTHER THREE BLOGS), what it’s truly like to write about funny/cringe-worthy things in your life, and how we met and became friends. Truly riveting topics.

When Kevin (camera guy, hype man, mic guy, guy who tells us we have two minutes left and to shut up, wise sage) made us this beautiful smiley waterfall background.

When we switched spots mid-episode and it messed up our names or “LOWER THIRD” as they say in the biz. 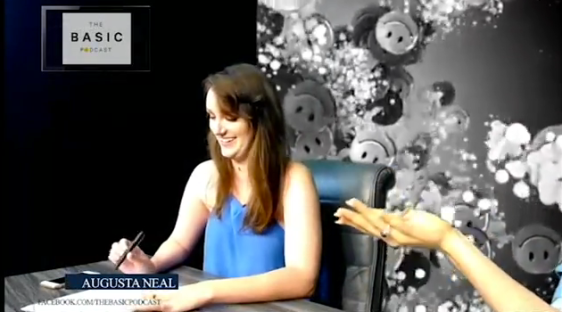 We somehow convinced reality TV King Spencer Pratt to call us during a live show. He is so self aware and hilarious. Things we learned: CRYSTAL KIDS CANNOT BE MANUFACTURED!!

We introduced our “Basic Moment of The Week” segment, in which I revealed I broke my finger registering for my wedding at Bed, Bath, Beyond, and Paige revealed she went to Disneyland at the age of 26. 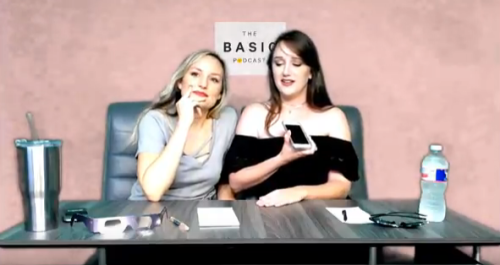 We caught our stride in episode 2, so please ignore episode 1, all pilots of every show ever is tragic. And if you’re Parks & Rec, the whole first season is tragic.

HA HA HA AWKWARD LAUGH but actually it was fun because Grant is fun. And cute! And single! And hilarious. Watch our interview, where I ask him dark and vulnerable questions to make Paige uncomfortable.

When we ran out of time because we got so lost in Grant’s eyes. (PETITION TO GET BASIC PODCAST 45 MINS INSTEAD OF 30 AMIRITE). 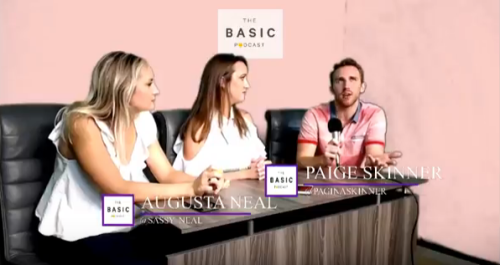 When we recapped my bachelorette party and said the word “gay” 780 times.

Episodes are on Facebook Live every Monday night at 7pm CST. Join us and leave comments on the world’s most important topics!!! Like tonight, celebs we hate!!!! Yay!!!

THANK YOU TO THOSE OF YOU WHO HAVE WATCHED, LIKED, OR COMMENTED!!!!!!